The general perception of WW1 military Generals is that they saw their men as cannon fodder. I’m not sure that’s true.

I can’t say whether the two non-WW1 soldiers referred to above are men of faith or not, because I didn’t ask them. However, I’d be surprised if not, as there is a strong religious focus in remembrance services across the Commonwealth, chaplains quietly get on with their task across the faith groups and I get the impression that the majority of military people I have contact with are people of faith. Reading about some of the Generals who served in World War 1, I was struck by the role of faith in their lives.

Kitchener is a good place to start. He wasn’t brought up strongly religious by all accounts but whilst at Staff College, he joined the English Church Union and enrolled in the Army Guild of the Holy Standard. His first official military posting was with the Palestine Exploration Fund where he mapped Palestine identifying over 400 new places and creating the basis of the maps of the area we still use today. Many of the places he came across are mentioned in the Bible and Torah and gave him a sense of connection with the past and by all accounts had a profound effect on him. At this time he also became fluent in Arabic and was able to pass quite convincingly as an Arab even whilst imprisoned. This suggests that he knew more than the language and got to know and understand the religious culture too. By the time he became Agent General in Egypt in 1911, he had a clear understanding of Turkish Law as he worked to improve the rights of the Egyptian peasants. His religion seems to have become all inclusive but it was not something he spoke about. This was evident in his becoming a Free Mason and an active one at that. Numerous Lodges in Africa and India bear his name. Kitchener was completely against the war being fought in East Africa as he knew it would be a long, drawn-out affair for no particular gain but was over-ridden by the politicians back in London.

The next General is Douglas Haig who was part of Alan Clark’s Donkey brigade. There are reasons for Generals having their bases behind the lines – security being one. Haig’s religious background was Church of Scotland. During and after the war he was very involved in the Church of Scotland, St Columba’s Pont Street in London where he served as an Elder. The church also had a close affinity with the British Legion due to Haig’s involvement in both. He had a personal chaplain whilst on the Front and would regularly take communion and attend Sunday Services. Haig’s connection with Africa goes back to the Anglo-Boer War where he made his name leading one of the forces and during World War 1 he sent Smuts a telegram of congratulations after the Central Railway line and the coastal towns had been taken over from the Germans. The two men were to see each other when Smuts moved to London in 1917 and consulted him over the 3rd battle of Passchendale.

Related to St Columba’s is the fact that it offered it’s crypt as a place for rifle training during the Great War. Although this might seem strange, it’s not that odd when one considers that the Church of Scotland did not dissociate itself from politics, and that the Pont Street church was a home away from home for Scots living in London. The lunches and soup kitchens provided by the church are well-known in Scottish circles. It also helps to know that the rifles used for training purposes did not fire real ammunition which is what I’d struggled with for years when I first discovered this little-known crypt-fact.

This brings us to Jan Smuts, the South African who served in East Africa and who later sat on the British War Cabinet and wrote the Charter for the League of Nations amogst other things. He was brought up Dutch Reformed and was technically meant to go into the Ministry when his brother died at a young-ish age. He did not seem to be a strong adherent to the Dutch Reformed Church. During the Boer War he was known to ride with a copy of the Old Testament in his saddle – in the original Greek and Hebrew. During WW1, whilst in England, he would often be found in the company of Quakers, of whom the Gilletts became long and lasting friends and he supported them in their conscientious objector campaign.

And more recently, the other South African who shares a place on Parliament Square with Smuts, is Nelson Mandela who was only born during the Great War years. He was brought up in a strong Methodist faith and attended the Lovedale University run by Methodist Missionaries. His faith remained quietly strong throughout his years in prison. But what is often overlooked is that he was one of the young lions who was instrumental in the formation of the ANC armed wing Umkonto Isiswe and the decision to launch attacks against Government buildings in the struggle against Apartheid.

Other religions feature too: Wavell of Wavell’s Arabs was known to have undertaken the Pilgrimage to Mecca. And my references have let me down – there was a commander of one of the Indian units in Nyasaland or Northern Rhodesia who also had made the hajj or pilgrimage. (I’ll add his name when I find it). And strong Christians such as Kitchener and General Gordon (of Khartoum fame) were involved in ensuring Muslims under their supervision were allowed access to their places of worship – Gordon being noted for building a mosque in the Sudan.

This leaves some questions: 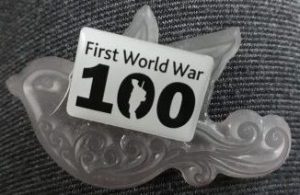 This year I discarded the remembrance poppy in favour of a dove – evidence of my journey over the past 4 years. In preparation for 2014 I had a special choker made with 4 poppies to reflect the four quarters of the globe. However, the start of the centenary commemorations showed just how exclusive this symbol was (and remains) especially when it comes to the conflict in Africa.

Poppies are not an African flower. The symbol, at least as it was linked with the Tower of London display, ignored the mass of Africans who for various (legitimately thought at the time) reasons are not recorded on the CWGC database. Then we have the Africans who served for more than one imperial power including Britain. The ‘other’ is not included. And what about all those who did their bit unofficially? The contributions of the home fronts, those who felt their calling was to keep the economy going or to safeguard some of the population for the future? All suffered through the terrible years of war and after.

Something inclusive was needed in the same way that the two-minute silence is. Something that transcended race, religion, gender, culture, age and … Posing this challenge to a reforming/liberal chaplain, his immediate reply was ‘the dove – it covers all religions.’ An internet search later, I was convinced. All continents except Antarctica have a dove species and all the major religions (at least 6) accept the dove. Most significant though, was what it represented: peace, hope and forgiveness.

The dove became my remembrance symbol. The next challenge was to find a representative dove (the 3 Abrahamic faiths each have a tailored dove). A trip to a local art shop supplied the item. All was set. Except… what to place at the cenotaph? Something natural, eco friendly and sustainable that anyone could easily access and which had symbolic meaning. Religious practice again supplied the answer: stones. They protected the dead from being dug up, were used for cairns to mark special places and were of the earth.

Broaching the issue with a friend, I discovered stones from the beach in Cape Town are used at the Castle Mendi memorial. There couldn’t be any objections to my inclusive suggestion. And at a small private-ish remembrance service at the site where the Germans were informed of the armistice (opposite bank of the Chambeshi River to where the factory was), a group of 22 set stones to remember all those involved in the wars in and from Africa.

It seems fitting that at this time of the year, I share with you my dove and all it symbolises: peace, hope and forgiveness.